Are you looking for a USB vacuum cleaner to get rid of crumbs from your keyboard? Or do you want a USB vac for cleaning the interior of your car? We’ve listed the best USB vacuums below to help you make the right choice.

Keyboards can quickly become filled with crumbs, dirt and who-knows-what-else. Other than blasting keys with compressed air, which sends dust and dirt around the room rather than removing it, keyboards can be almost impossible to clean. Fortunately, there is a solution – USB vacuum cleaners.

These compact and cheap gadgets are designed for getting rid of small crumbs, dust and the occasional hair. But which are the best USB keyboard vacuum cleaners? And how do they actually work? Let’s find out!

What Are USB Miniature Vacuum Cleaners?

Sometimes you don’t need a high-suction cylinder or upright vacuum cleaner. This is especially true when trying to clean your laptop or PC keyboard, where even the smallest crevice tool isn’t going to get between the keys.

That’s where USB vacuum cleaners come in. While they are often seen as a gimmick – and in some cases they are – a USB hoover actually has a practical purpose.​ Most have thin nozzles that are great for getting rid of crumbs, dust and hairs that have fallen between keys.

They obviously lack the suction power of full-size vacuums, but can be useful for keeping your desk tidy. The mini designs also make them easy to store in a drawer. Just don’t expect them to match an upright vacuum cleaner when it comes to suction power!

​There’s a second purpose for this type of vacuum though: car USB vacuums.

Like full-size car vacuum cleaners, these need to be more powerful than the average USB machine. This is because they require greater suction to get rid of dirt that’s fallen between seats, into glove compartments and around gear sticks.

Unlike keyboard vacuums, car USB models tend to be battery powered but charged via USB. We’ve included a USB vacuum cleaner for cars in the list below, even though this post is mainly focused on mini USB hoovers.

How Do They Work?

Miniature vacuums work on similar principles to full-size models, although without the advanced features or filtration.

As they are powered by USB, the available power is considerably lower than a mains-powered vacuum or even a cordless model. That’s why USB vacuums tend to be small, lightweight and relatively low suction.

Aside from these features, USB vacuums come in a range of sizes and shapes. Some have a long and thin nozzle, while others come with a nozzle that looks like a mini crevice tool​. Others include multiple nozzles for dusting or getting rid of dirt and dust.

Most models just have an on-off switch, but some include a setting for adjusting suction. While they can run continuously, they will run down your laptop battery faster if it’s not connected to mains power.​

As you would expect from a miniature vacuum, these gadgets tend to be delicate. As long as you treat them carefully, the best models should last a reasonable length of time. But they are only built for quick and simple jobs.

For this reason, it’s important to have realistic expectations of a USB vacuum. They are small, lightweight and cheap gadgets for getting rid of easy-to-clean crumbs and dirt in keyboards. They are never going to provide enough suction power for deep cleaning though.

Which Are The Best USB Vacuums?

Note: As most people are looking for a mini vacuum rather than one that’s specifically powered by USB, we’ve included miniature models that run on battery power as well as via USB cable. We’ve listed the power source of each vacuum to make this clear. 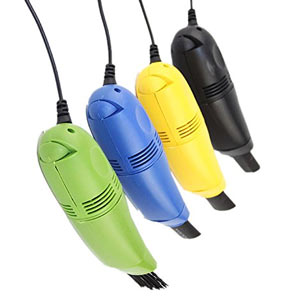 One of the most popular keyboard cleaners is the Viskey. It’s a small model that’s sold for just a few pounds, yet is capable of quickly cleaning between laptop or PC keys.

Despite its ultra-low price, the Viskey comes with two nozzles. The first is a larger nozzle, while the second also has a brush and smaller holes.

As a bonus, you can get this vacuum in four different colours. In terms of size, it’s around 10cm long (not including the USB power cord or nozzle).

There are some drawbacks though. It’s surprisingly loud for such a small device – especially as the suction power is lower than other USB vacs. There are also reports that it doesn’t last long.

Quick Summary: The Viskey is a (very) cheap USB keyboard hoover that’s made in China. It’s not the best USB vacuum – nor should you expect it to last long – but for the price it can do a decent job. 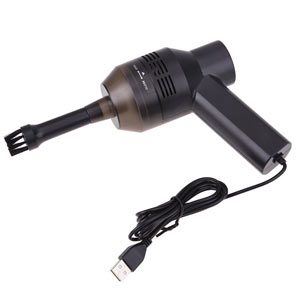 The USB Mini Vacuum Cleaner is designed to tackle dust, loose hairs, crumbs and other small debris on your computer keyboard. As the name suggests, it’s powered via USB instead of a battery, and has a unique nozzle to help get between keys.

With its “gun”-shaped design and long nozzle, it’s clear that this vacuum is designed specifically for computer keyboards. The nozzle has a brush on the end to agitate crumbs and dust and allow for easier cleaning – and it also has a mini filter (although you’ll need to wash this regularly to maintain suction power).

As you would expect from a cheap USB vacuum cleaner, this product is great for getting up the easy stuff but struggles with anything else. The brush is useful for removing dust between keys, although we would have liked stronger suction power.

Quick Summary: This USB vacuum is a decent choice if you need to clean your keyboard. The suction power is low, but the thin nozzle and brush help to get rid of dust and crumbs between keyboard keys. Don’t expect it to handle tough cleaning jobs though. 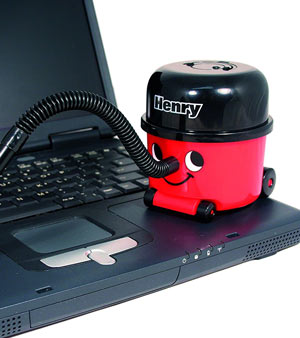 One of the most iconic vacuum cleaners is the Numatic Henry Hoover, so it’s not surprising there is a miniature version. This is a battery powered mini vacuum, rather than USB, but it’s designed for the same purpose: sucking up dust and crumbs from keyboards and desks.

The Desktop Henry might look like a toy, but it’s not just for show and even comes with accessories. The regular “floor head” provides a slightly wider suction surface than most USB vacuums, while the miniature crevice tool is great for getting between the keys of your desktop or laptop keyboard.

With that said, the mini Henry keyboard vacuum is only designed for the easiest cleaning tasks. It’s not going to clean large clumps of dust from your desktop fan or CPU – it simply doesn’t have the power. It’s also not strong enough to use in a car. For crumbs and regular dust, however, it’s a useful gadget for a relatively low price.​

Quick Summary: If you’re looking for a vacuum for crumbs and dust, the Desktop Henry Hoover could be a good option. It’s a battery-powered model that’s built to handle quick cleaning tasks such as vacuuming between keyboard keys – and for this is does a decent job. For harder tasks, however, the poor suction means it’s not going to be much use.​ 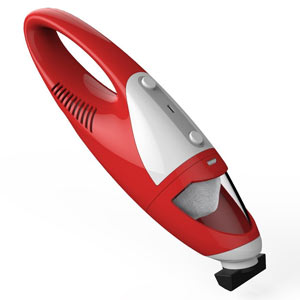 The final model on this list is something a bit different – so make sure you fully understand what this model provides before you buy.

The Evertop Mini Car Hoover is a cordless handheld vacuum. Instead of charging via a regular plug socket, however, it comes with a USB charger so it can be recharged with a USB port.

While it’s called a car hoover, it’s capable of cleaning keyboards too – although the lack of a crevice tool means it can’t get deep between keys like the other vacuums on this list. It’s considerably more powerful than the other USB vacuums too, however, so it’s a more versatile tool.​

With a run-time of 25 minutes, the Evertop provides more than enough cleaning time for cars or vans. It doesn’t have the same suction power as the best handheld vacuum﻿﻿﻿﻿﻿﻿s, but if you need a simple car vacuum that can be charged via USB it might be an option to consider.

Other features include a bagless design, relatively low noise output and a rectangular nozzle. It takes approximately 5 hours to charge, which is around average for a handheld model.

In terms of suction power, the Evertop is more effective at picking up larger crumbs and dirt than the smaller USB vacuums on this list. It’s nowhere near as effective as high-powered handheld models though.​

Quick Summary: The Evertop Ultra-Light Car Hoover is a cheap and basic handheld bagless vacuum that doesn’t have the suction power to rival the best in this category. Its ability to charge via USB, however, means that if you need a vacuum with this function it’s a decent option. It’s also a handy tool for quickly cleaning cars interiors.

As long as you have the right expectations, a USB vacuum cleaner can be a useful tool for keeping your desk and keyboard clean. These models are cheap and easy to use, so they are great for getting rid of crumbs and dust. Don’t expect to use them on carpets, large debris or harder cleaning jobs though.

If you’re looking for a USB keyboard hoover, the Viskey is probably the best-value choice. It has low suction power but a very low price to match.

For car interiors, the Evertop (battery powered) isn’t as powerful or versatile as true car vacuums, but could be a good choice if you need a vacuum that can be charged via USB.​

SpotlessVacuum.co.uk exists for a single purpose - to help you find the best vacuum for your requirements. There are hundreds of vacuums on the market, so our goal is to simplify choosing a vacuum.

Upright vacuums are the most popular type in the UK (although they are being rapidly caught by cordless.) So if that's what you're looking for, check out the best upright vacuum of 2020.

Got questions or feedback? Let us know using the Contact page and we'll get back to you as soon as possible. 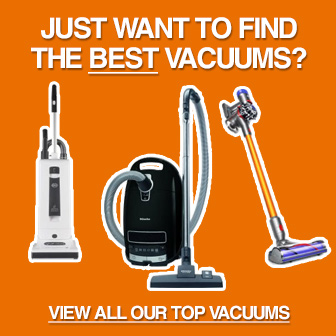