At SpotlessVacuum.co.uk, we think it’s important to keep up with the business side of vacuum cleaners. Company profits largely determine the future of the vacuum market. In this article, we look at the success of Dyson’s cordless vacuums – and where the company might be going in the future.

Dyson has always produced high-end vacuums – much to the dismay of people who wanted a cheaper option. It seems the company’s latest strategy of focusing on cordless vacuums has been successful though.

Considering the advantages of cordless vacs, it’s not surprising they have become so popular. With lightweight designs and no cord, they are much easier to move around the home. Battery cleaners also tend to be more manoeuvrable – which is great for cleaning in tight spaces.

Despite its reputation as an innovator, Dyson was far from the first company to make a popular cordless vacuum though. One of the first successful models was actually made by GTech – a company founded by ex-Dyson employees.

There’s no doubt that Dyson has caught up now though. The V6 range of cordless vacuums, which includes models such as the Fluffy and Absolute, has proven wildly popular even with a high price tag. The newer V8 series is pricier still, but addresses a number of complaints about the V6 (including the short battery life).

What Makes the Dyson V6 and V8 Range Different?

Nearly all vacuum manufacturers produce cordless models, so what makes the V6 and V8 stand out? 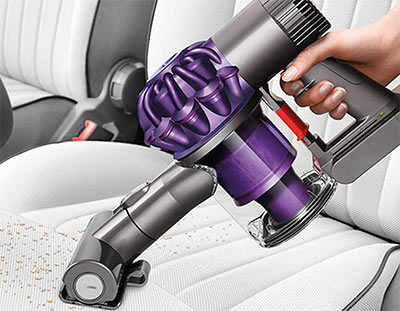 The cordless range converts to a handheld when needed

The first thing is the design. Unlike many cordless vacuums, the motor and vacuum body are located next to the grip. This allows you to detach the tube to turn the vacuum into a powerful handheld.

As you would expect from Dyson, their cordless vacuums are also powerful. A lack of suction has been a common complaint about cordless vacuums, so we think this is one of the reasons why people are willing to pay the high price.

Aside from the design and suction power, the V6 and V8 series have a number of other interesting features. Most of the models come with several floor-heads so you can tackle various tasks. The V6 Fluffy, for example, comes with the Fluffy floor-head that’s great for hard floors.

That doesn’t mean we think Dyson cordless vacuums are necessarily the best on the market though. Our top-rated cordless is the V8 Animal, but the price tag is going to be a barrier for many people. The V6 is also an excellent series, but it’s let down by a short battery life.

We also think the various models are confusing for the average consumer. It’s not always clear what the difference is between the V6 Standard, Total Clean, Fluffy, Absolute and Animal. Dyson have tried to make the models more intuitive with the V8 though.

Despite the fact that the Dyson cordless range isn’t perfect, there is clearly demand for high-end cordless vacuums.

James Dyson has said that the V6 and V8 adoption rate is “growing at a phenomenal rate,” which isn’t an exaggeration. The company’s cordless vacuums have become their fastest selling models ever. In the process, they’ve pushed Dyson’s profit to £621 million. This is a 41% increase – and shows the company’s focus on expensive vacuums is working.

Plans for the Future

Dyson is now about much more than vacuum cleaners though. With a work-force of 3500 employees, the company has set its sight on both existing and emerging markets.

You’ve probably noticed Dyson products cropping up in unexpected places. The company’s hand dryers are popular in toilets around the UK due to their quick-drying design. Dyson also produces hair dryers, fans and air purifiers.

Most interestingly, the company is putting a lot of money into researching batteries (£1 billion over the next five years according to some estimates). There are plenty of uses for more efficient batteries that charge faster, hold more energy and don’t heat up as much – and Dyson’s cordless range would benefit greatly from these advances.

Many people think Dyson are looking beyond cordless vacuums though. With better batteries the company may be able to compete in the electric car market. This hasn’t been confirmed or denied by the company, but could provide an area of huge growth.

Dyson’s focus on high-end vacuum cleaners and refusal to produce a cheaper option has always been a point of debate. With soaring profits, largely due to their cordless vacuum range, it seems this strategy is working though. Plus, with new products and the potential to enter growing markets, the future looks bright for this popular UK company.

James Hall is a vacuum and home appliance expert from the UK. Having reviewed hundreds of appliances for over 10 years, James is experienced at helping you choose the right model for your home. His writing has been featured in major publications such as Organic Lifestyle Magazine, Entirely Pets and The Doctor Weighs In. Visit our About Us page to read more. You can also find him on LinkedIn.
Subscribe
0 Comments
Inline Feedbacks
View all comments