Lithium-ion batteries have become increasingly common in consumer electronics. Many of the vacuums on our list of the best cordless vacuums come with a lithium-ion battery, and manufacturers often boast that their models include this battery type.

But what makes a lithium-ion battery different to other types? How do they work? And what are the advantages? Keep reading to find out.

What is a Lithium-Ion Battery?

Without getting too technical, a Li-ion battery is a rechargeable battery that, unlike other types, uses lithium ions. These ions move between electrodes in one direction to recharge and another to discharge.

A lithium-ion battery is made up of several components. The most important include a monitor for assessing battery charge, a temperature sensor to track temperature changes, a voltage converter and a voltage tap.

The batteries can be found in a variety of shapes and sizes, from large laptop batteries to those that fit into your phone. Inside, however, they all use the same process for storing and discharging energy. 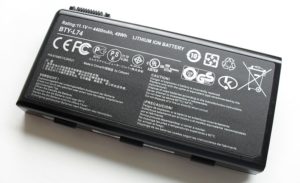 Lithium-Ion batteries have become common in a variety of consumer products, including laptops. (Image Credit: Wikipedia)

How Do They Work?

The interior of a Li-ion battery is pressurised. This is vital for the chemical reaction, but also adds an element of risk.

For this reason, the exterior of a lithium-ion battery is usually made from metal. In most cases, the casing has a pressure vent. If the pressure inside the battery increases too much, the vent allows it to normalise and prevent explosion – although the battery is likely to be damaged beyond repair by this point.

While a Li-ion battery might look simple from the outside, there’s a lot going on behind the scenes. The basic structure of the battery is combination of three thin sheets of material – a positive and negative electrode and a third sheet to act as a separator.

When charging, ions move between the electrodes. Then on discharge they move in the opposite direction. This flow of ions is the basic mechanism for storing and discharging energy.

An interesting note about the Li-ion battery is that the charge state monitor is actually a small computer. This is one of the reasons why a lithium-ion battery is more expensive. The purpose of the computer is to track the amount of charge, so that it can provide information to the appliance. It may also regulate temperature by preventing energy flow if the battery gets too hot.

What are the Advantages for Cordless Vacuums?

One of the biggest downsides to early cordless vacuums was battery life. Even today, one of the reasons people are reluctant to switch to a cordless is the limited run-time between charges (along with reduced suction).

For this reason, improving battery life has been a primary concern amongst vacuum manufacturers.

The good news is that battery technology, in general, has greatly improved on cordless vacuums since the first models. They are now more efficient, allowing for greater power without compromising battery life. This is partly because lithium-ion batteries are now included in most of the best models.

There are a number of advantages to lithium-ion batteries compared to other types. These include:

There are some drawbacks to lithium-ion batteries though, including that they only last two or three years after manufacture, they are more sensitive to heat and are also more expensive.

Which Cordless Vacuum Have a Lithium-Ion Battery? 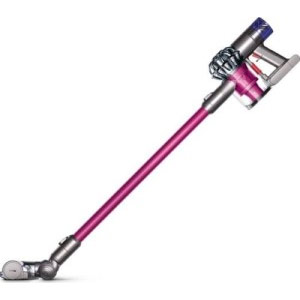 The Dyson V6 is built with a lithium-ion battery. Interestingly, the newer V8 series uses a different type of battery.

Increasing numbers of cordless vacuums come with a lithium-ion battery, mainly because they hold their charge more efficiently. Some of the most popular models include:

A notable exception is the Dyson V8 range, which is our top-rated cordless vacuum cleaner. For this range, Dyson have chosen a Nickel-Cobalt-Aluminium battery. We’ll do an article on this type of battery in the near future.

Lithium-ion batteries have a number of advantages over other types of battery, which is why they’ve become increasingly common in cordless vacuums. These advantages include better charge retention, ability to complete more charge cycles and a lighter weight.

They have their drawbacks though, such as the relatively short lifetime and heat sensitivity. They certainly aren’t the “perfect” battery as some manufacturers would like you to believe. Even so, many of our favourite cordless models use Li-ion batteries for the advantages they provide.

James Hall is a vacuum and home appliance expert from the UK. Having reviewed hundreds of appliances for over 10 years, James is experienced at helping you choose the right model for your home. His writing has been featured in major publications such as Organic Lifestyle Magazine, Entirely Pets and The Doctor Weighs In. Visit our About Us page to read more. You can also find him on LinkedIn.
Subscribe
1 Comment
Oldest
Newest Most Voted
Inline Feedbacks
View all comments

Hi there, do lithium batteries cost more? I have noticed since having my vax cordless hoover that my electric bill has gone sky high?