Many vacuum brands claim their model comes equipped with a HEPA filter. But what exactly is a HEPA filter? How does it work? And, most importantly, how do these filters benefit you? That’s what we aim to find out in this article.

What is a HEPA Filter? 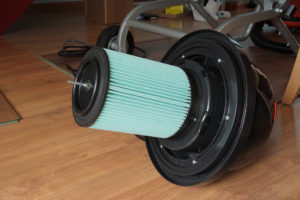 Example of a HEPA filter from a ShopVac model. Credit: Flickr

Let’s start with the basics. While our homes might seem to have clean air, the reality is very different. The air we breathe is filled with particles of dust, allergens, dirt and dust mites – all of which can cause allergic reactions or asthma attacks.

You can’t get rid of these floating allergens completely, but you can reduce them to manageable levels.

Unfortunately, many vacuums do the opposite. When a vacuum sucks up dirt and dust, it must filter this air before it is released via the exhaust, otherwise you’re really just moving the dirt around the home. Nearly all vacuums come with some sort of filter, but the quality and efficiency varies greatly.

The best type of filter is the HEPA (high-efficiency particulate air) filter – which is why they have become such an important selling point for vacuum brands. These filters can remove particles as small as 0.3 microns, which is considerably smaller than standard filters. To put this in perspective, a human hair is around 100 microns wide.

HEPA filters don’t just catch hair and dirt though. They are effective at stopping certain types of bacteria, viruses and mould from spreading around the home.

How does a HEPA Filter Work?

Basic non-HEPA filters act as a sieve. Air passes through a sheet of small holes, which traps larger particles while letting the majority of the air through. This works well for larger particles, but small particles of dust, dirt and hair can pass through without being caught.

The most obvious solution is to make the holes smaller. The problem is that these filters become stuffed with particles very quickly, leading to a loss of suction. The same is true when using multiple layers of standard filters.

That’s why HEPA filters use a different mechanism to remove dust and dirt particles from the air. There are two primary stages: 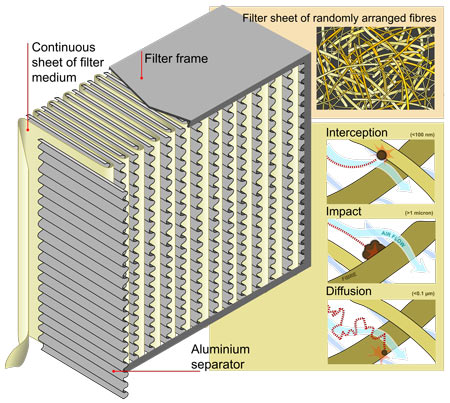 This diagram shows the three methods HEPA filters use to catch dirt and dust. Credit: Wiki

This combination of techniques makes HEPA filters highly effective at removing airborne particles. To be classed as a HEPA, a filter must be capable of removing up to 99.97% of particles from the air, including dust mites, mould, pollen, dirt and bacteria. As you can imagine, this can greatly relieve allergies, which is why we recommend HEPA filters for allergy sufferers.

When Were They Invented?

The first recorded instance of using fibres to trap dust and dirt was during the Manhattan Project (which built the first atom bomb). There was a vital need to filter small radioactive particles when building the atomic bomb, which fibre filters were effective at doing.

After this initial development, HEPA filters have gradually progressed, mainly due to industrial applications. While they are commonly used in household vacuums, they are still important in a variety of industries.

Are There Different Types?

It would be great if all HEPA filters were equally effective – but they aren’t. Every filter has a different ability to purify air, and some models advertised with HEPA filters aren’t “true” HEPA models.

The only way to judge whether a filter is a true HEPA is to look at the models’ statistics. True HEPA filters stop 99.97% of particles with a diameter of 0.3 microns or more. If a filter can’t achieve this, then it is not a true HEPA.

Some HEPA filters are also labelled with the letters A-E depending on their effectiveness. While all filters with these letters are “true” HEPA filters, A is the least effective while E is suitable for military grade applications. For vacuuming, an A grade HEPA should be more than sufficient.

As a final note in this section, avoid any vacuum manufacturer who advertisers “HEPA-type” filters without providing details about filtering efficiency.

Do You Need a HEPA Filter?

We recommend HEPA filter vacuums to anyone with an airborne allergy. While they can’t eliminate all allergens, HEPA filters can reduce the amount in the air dramatically. This can quickly relieve symptoms, or at least reduce them to a manageable level.

But what if you don’t have an allergy? HEPA filters may still be good for your health, as they prevent some bacteria, mould spores and viruses from being released back into the air after vacuuming. They also help to keep your home’s air cleaner, which is always a good thing.

One thing HEPA filters can’t do is remove odours though, which is especially important if you have a pet. For this, you’ll need a vacuum with a combination of HEPA filter and an activated charcoal filter. These trap fumes and odours, leaving the air smelling fresher.

A vacuum with a HEPA filter is an essential purchase for anyone with a dust or pollen allergy. These filters are able to remove allergens from the air much more effectively than regular “sieve” filters, using layers of dense glass fibres to catch smaller particles.

While there are strict standards for a filter to be classed as HEPA – it must be able to remove 99.97% of particles larger than 0.3 microns – that hasn’t stopped some brands trying to trick buyers with “HEPA-like” filters. If you’re looking for at true HEPA, make sure it meets the requirements, and avoid “Hepa-Like” filters.

James Hall is a vacuum and home appliance expert from the UK. Having reviewed hundreds of appliances for over 10 years, James is experienced at helping you choose the right model for your home. His writing has been featured in major publications such as Organic Lifestyle Magazine, Entirely Pets and The Doctor Weighs In. Visit our About Us page to read more. You can also find him on LinkedIn.
Subscribe
0 Comments
Inline Feedbacks
View all comments