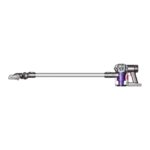 The Dyson V6 cordless vacuum cleaner is the base model of the V6 range (which includes the Absolute, Total Clean and Fluffy). It’s also the cheapest V6 vacuum, with an RRP of £319, and includes features such as 2-tier Radial Cyclone technology, a quick-release bin and two power modes.

But does the Dyson V6 justify its relatively high price tag? And are buyers pleased with the model’s performance and value? Let’s find out in our Dyson V6 cordless vacuum review!

Note: The Dyson V6 is the re-branded version of the previous DC59 Animal. It has virtually the same features, aside from a couple of accessories which have been removed, but costs considerably less.

Let’s start with the obvious: the Dyson V6 is a highly attractive vacuum (although this is far from the only reason its sibling the V6 Fluffy made our list of the best cordless vacuums – as we’ll find out.) With its sleek, lightweight design and convenient charging base, this is a vacuum you won’t be ashamed of showing off in your home.

Part of the trade-off when you buy an ultra-lightweight vacuum cleaner, such as the V6 which only weighs 2kg, is that the bin is necessarily going to be small. It’s easy to carry around though – plus it’s much more portable than the average upright vacuum.

The V6 has a 0.4 litre capacity, which is less than half the size of the Bosch Athlet and probably not big enough to clean a large home. The bin comes with a handy “Max” line though, so you can quickly see when suction power is likely to be affected by the dust and dirt collected.

To partly make up for the small capacity, the V6 has an “easy empty” system, allowing you to dump dust, dirt and hair into a bin. This works great in theory – as long as you don’t overfill the canister, as this can cause dust to become stuck. Newer models of the Dyson cordless range, such as the V7 and V8, have a better emptying system that prevents fluff getting stuck (although they have a higher price too).

Another feature of the Dyson V6 is the “mini-ball” design of the motorised floor head. This is a smaller version of the ball technology found on larger Dyson models, and makes the V6 highly manoeuvrable when used on floors. If you’ve never tried a vac with a ball design before, you’ll instantly notice that it’s easier to swivel around furniture.

One of the great things about the V6 is you can remove the extension wand and attach the motorised tool directly to the vacuum. This makes it a handheld vacuum cleaner, and allows you to use all the V6’s suction power on stairs or in your car. The power button also feels responsive and the charging station is easy to fit.

Side Note: Want to know the difference between the V6 and V7 Dyson vacuums? Click here for our comparison!

The Dyson V6 cordless vacuum battery life isn’t anything to write home about, but it isn’t awful either. With a run-time of 20 minutes on a full charge (which takes around three and a half hours), you should be able to clean most of a home before recharging, although for larger homes the V6 is probably only going to be useful as a supplementary vacuum.

This issue can be partly offset by changing your cleaning habits. Instead of trying to thoroughly clean your home on a single charge, you could clean a couple of rooms each day to minimise downtime. The V6 probably isn’t the right choice if you prefer to do a single deep clean each week though.

To maximise battery life, the V6 has an on/off button that needs to be held down when in use. This reduces wasted battery power and can greatly increase the effective run-time of the device. The downside is that holding the button may get tiring, although on balance we think this is a useful feature.

Even with this feature the vacuum still doesn’t get close to the run-time of the Gtech Air Ram. But for most cleaning jobs in relatively small houses, the 20 minute battery life should be sufficient.

The V6’s suction power is an area it really shines. The V6’s digital motor spins at 110000RPM, generating strong suction that compares favourably with most other cordless models even on its “normal” setting.

The V6 seems to perform best on carpets, mainly due to the brush design. It provides strong suction on hard-floors but has a tendency to push larger debris around. This usually isn’t a problem, however, as larger objects such as cereal are usually best cleaned with a dust pan and brush.

Despite its manufacturer’s claims, the Dyson V6 can’t match the suction power of corded models – especially powerful Dyson uprights. But for most tasks it does an excellent job. The only time you’ll notice the V6 struggle on “normal” mode is when vacuuming very thick carpets or rugs, or trying to clean particularly stubborn pet hair.

This is why Dyson have included a “Max” setting with the V6. When you need extra suction you can boost the vacuum’s power at the expense of battery life. This is great for tackling tough areas, but should be used sparingly as it drops the battery life down to around six minutes. For comparison, the V6 offers 100 air watts of suction power on “Max” mode compared with only 28 on its normal setting – so there is a significant increase in suction power. Using Max mode also increases the volume of the machine significantly.

One of the toughest jobs for vacuums is pet hair, and the V6 is capable of sucking up most hair from both carpets and hard floors (although this often takes a few passes). It does struggle with the toughest pet hair though, especially in long carpets, so it’s probably best used as a “little and often” vacuum to reduce pet hair while using a more powerful corded model for the heavy work.

Dyson have included a range of features to make the V6 easy to use. We’ve already talked about some, but here’s a breakdown:

The Dyson V6 is built with a 2-tier Radial cyclone system. This includes 15 individual cyclones, which work to remove fine dust and particles while maintaining suction power. Once larger particles have been removed by the cyclone, the air is then sent through a filter.

The filter is washable and should be rinsed regularly with water to maintain suction and filtration. Once washed, it should be allowed to dry fully which takes around 24 hours.

Dyson models have always been expensive, so it’s no surprise that the V6 is a relatively pricey model. Even so, it’s one of the cheapest Dyson cordless models on the market, so it’s a great choice if your budget can’t stretch to vacuums such as the V8.

As we mentioned, the V6 is the entry-level model in the V6 range with an RRP of £319.99. The top-end vacuum is the V6 Absolute, which has a higher price tag but several extra features, including more accessories, a more powerful direct-drive motorhead and a HEPA filter.

As the V6 is the basic model in its product range, it doesn’t come with the full range of accessories. It still includes a combination tool and crevice tool though, along with the wand, motorised head and docking station (which both charges the vacuum and stores both tools). If you want a wider range of tools, the V6 Flexi (reviewed here) is a good alternative.

The motorised head comes with a mix of carbon fibre and nylon bristles. These serve the dual purpose of minimising friction on hard surfaces while improving dust and dirt pickup.

With its 20 minute run-time and relatively small capacity, the Dyson V6 clearly isn’t meant to be used as the primary vacuum in a large home. Even so, its lightweight design, powerful suction, motorised cleaning head (although this reduces battery run-time) and wall-mounted dock make this an excellent cordless vacuum that we highly recommend.

The major drawback of the Dyson V6 vacuum cleaner is the price, which is considerably higher than models such as the Morphy Richards 732000. However, the upside is you’re getting a powerful and highly versatile cordless model that’s suitable for almost any floor, cars, stairs and high up places. Click here for the Dyson V6’s price.