Dyson released their V7 cordless vacuum in early 2017. The name suggests it sits between the V6 and V8 ranges – but how do the models compare? Read our V7 vs V8 comparison to find out!

The V7 isn’t quite as powerful as the V8, but it’s cheaper and comes with many of the same features. Which should you buy though?

For maximum suction or a longer 40-minute run-time, the Dyson V8 is the best choice. It’s an outstanding vac that excels on any surface. Click here to view the price of the V8 Animal.

If you don’t mind the 30-minute run-time or slightly lower suction, the V7 is a cheaper option. Click to view the V7 Motorhead price.

At SpotlessVacuum.co.uk, We’re big fans of Dyson cordless vacuums. The Dyson V8 Absolute is our highest rated cordless, while versions the V6 series also feature on several of our “Best of” lists.

There’s no doubt Dyson vacuums are expensive. But the combination of powerful suction, excellent floor tools and handheld mode make the V6 and V8 difficult to beat.

In fact, one of our only criticisms is the large number of Dyson cordless vacuums on the market. There’s a reason for this – each version has its own set of tools – but we don’t think Dyson does a good job of making the differences clear.​

To make matters more confusing, Dyson released the new V7 series in 2017. The goal of the Dyson V7 is to provide a middle-ground between the cheaper V6, which has a relatively short run-time, and more powerful V8.

While we certainly think there is a gap for the V7, it added to Dyson’s already extensive array of cordless vacuums (this is why we’ve written in-depth about the differences between the V6 and V8, the V8 and V10, and compared the V8 Absolute and Animal).

The Dyson V7 was initially only available through Dyson’s website, but is now sold on regular shopping sites. We’ve received a few questions about whether it’s worth buying, so we thought it would be useful to compare it to the V8.

As the name suggests, the V7 aims to improve on the V6 cordless vacuum while being cheaper than the V8 (click here for a comparison of the V6 and V7). It has many of the features found on the flagship V8, but is available at a lower price.

The V7 is built with a similar design to the V8. The body of the vacuum has a trigger for suction and can either be used in handheld mode or as a stick vacuum. When used as a stick vacuum, the powerful direct-drive floor head can clean both carpets and hard floors.

Other features include​ an improved battery life compared to the V6 (but shorter than the V8), “no-touch” dirt emptying system and several accessories. Like other Dyson cordless vacuums, you can switch to max mode when you need more power.

The Dyson V7 is available in three versions: Motorhead, Animal and Total Clean. There is no “Absolute” version of the V7 – the top-end model is the Total Clean. Here’s an overview of the different versions:

Now, let’s take a look at how the V7 compares to the V8. The table below summarises most of the main differences, or scroll down for a more in-depth comparison.

* This is the RRP listed on the Dyson website. It doesn’t reflect the current price of each model on shopping sites on in-store.

Both the V7 and V8 have three versions but only the Animal models are directly comparable. The Total Clean versions are quite different in terms of filter and tools, while the Motorhead and Absolute only appear on the V7 and V8 respectively.

In terms of design, both the V7 and V8 are similar:

One of the main differences between the V7 and V8 is the motor. The Dyson V8 comes with the company’s most powerful V8 engine, so it’s able to remove more dust and dirt – especially when in “boost” mode. The V8 also has a more powerful direct-drive cleaner head that can clean deeper into carpets.

This doesn’t mean the V7 is weak though. Dyson claims ​the V7’s direct-drive floor head is still 75% more powerful than standard V6, which is already a powerful handheld.

Battery run-time is probably the biggest difference between the V8 and V7. The V7 has a maximum run-time of 30 minutes when used with a non-motorised floor tool, which is 10 minutes less than the V8.

30 minutes is around average for a cordless vacuum – and probably enough for most cleaning tasks. This is especially true as cordless vacs are usually better for “little and often” cleaning rather than extended sessions.

Even so, reducing run-time by 10 minutes may be an issue for some households – especially as this is the maximum time without a motorised floor tool.

Both the V7 and V8 have similar accessories. The V7 Motorhead, for example, includes a combination tool and crevice tool. Other models have a soft-dusting brush and mini motorised tool. All these accessories can be found on the V8, including several others, but the kit you get depends on the version.

The V7 and V8 also both include a docking station for charging and storing accessories.

Differences: Both have the same accessories but vary depending on the version

Filtration systems tend to go under the radar, but are vital for allergy sufferers. Dyson have been somewhat vague about the filter system included with the V7, but the basic model doesn’t seem to come with the advanced filtration system of the V8.

Instead, you get a lifetime washable filter. This may not be as effective as the V8 for allergy sufferers.

The V7 is cheaper than the V8 – but the difference at first release probably isn’t as much as many people hoped.

The V7 Animal, for example, has an RRP of £299.99 according to the Dyson website at the time this article was last updated. The V8 Animal, which has a longer battery life, more powerful suction and better filter, has an RRP of £349.99.

While this is a saving ​of £50, which is a decent amount of money, we recommend paying extra to get the advanced features of the V8.

The good news is the price for the V7 already appears to be dropping. We’ve seen the Animal version, for example, sold for considerably less than the RRP. If you can find any of the V7 versions for less than £60 cheaper than the corresponding V8, we think they provide good value.​

Differences: V7 is surprisingly expensive, although it’s cheaper than the V8. If you can find it for £60 less than the equivalent V8 model, it’s definitely worth considering though

To summarise, the Dyson V7 has a less effective filter, a 10-minute shorter run-time and isn’t quite as powerful. It still has many of the same features of the V8 though, including the bin emptying system, yet is available for a cheaper price.

To put this in context, the Dyson V8 is by far the best cordless vacuum on the market at the moment (at least until the V10), so this doesn’t mean the V7 is a bad cordless. In fact, it’s a great vacuum – but with an RRP that’s not much lower than the V8, we can’t help but feel Dyson has slightly missed the mark.

With that said, now the V7 has been on the market for a few months we’re starting to see the price drop.

As we mentioned in the price section, if you can find the V7 for around £60 cheaper than the corresponding V8 version – and don’t mind the ​reduced specification – it’s an excellent vacuum.

James Hall is a vacuum and home appliance expert from the UK. Having reviewed hundreds of appliances for over 10 years, James is experienced at helping you choose the right model for your home. His writing has been featured in major publications such as Organic Lifestyle Magazine, Entirely Pets and The Doctor Weighs In. Visit our About Us page to read more. You can also find him on LinkedIn.
Subscribe
7 Comments
Oldest
Newest Most Voted
Inline Feedbacks
View all comments

The difference between the Absolute and Absolute PRO…..
is the PRO has a black tube..
YES…That’s it…a black centre Tube….PMSL…

Completely agree Tony! Dyson has really taken this on-board recently though and have been simplifying their range.

Does the hardfloor (fluffy) tool work well with animal hair all over the hard floor or is the standard motorhead better?

What is the runtime with motorhead?

Does the V7 Animal come with the hard floor tool?

Hi John. No, the V7 Animal doesn’t include that tool – you’ll need to get the Total Clean. 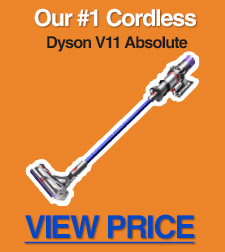