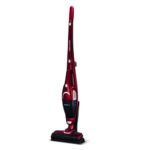 The Morphy Richards 732005 has proven to be a wildly popular cordless vacuum cleaner, reaching the best-seller lists of many online retailers. But what makes the 732005 Supervac such an attractive model to buyers? Does it live up to the hype? And is it suited for heavy cleaning sessions or just for small daily jobs?

In this Morphy Richards 732005 2-in-1 Supervac review, we’re going to go through the main features of the model before diving into the details. By the end, you should have a good idea as to whether this is the right cordless vacuum for you. So let’s get started!

The Morphy Richards 732005 Supvervac has the sleek and stylish design we’ve come to expect from this company (for more information, see our page at best Morphy Richards vacuums). While the appearance doesn’t have the classy appeal of other models on the market, it’s not an ugly cordless model either. The model we’ve reviewed also has a bold red colour scheme.

One of the most interesting design features is the collapsible handle. This is perfect if you want to store the vacuum in a small cupboard, as it greatly reduces the height of the model when it’s not in use.

Like most cordless vacuums, the 732005 is simple to assemble as it’s almost ready to use out of the box. While it might not be as futuristic as more recent Dyson vacs, it’s built to a reasonable standard – especially considering the price. It’s also relatively lightweight, so it’s great for taking up and down stairs.

A downside of the 732005 is its small 0.3 dust capacity. Most cordless vacs are small compared to corded models, but 0.3 litres is particularly tiny and means the vacuum fills up fast. It’s relatively easy to empty though, which somewhat makes up for it.

The head of the Morphy Richards 732005 is also able to swivel. This makes it much easier to manoeuvre around the home than a fixed-head vacuum. If you’ve never used a model with this feature before, you’ll immediately notice a difference in mobility.

The Morphy Richards 732005 Supervac cordless vacuum cleaner boasts a 35 minute run-time, which should be enough for most everyday cleaning jobs. This run-time is achieved with the vacuum’s 18V battery, which the company claims provides greater cleaning performance compared to many of its other models. The battery also requires five hours to recharge once empty.

This run-time compares favourably with most other Supervac models. The Supervac 732000, for example, only has a 20 minute run-time (although there is a more expensive Supervac with a 24V battery and 40 minute run-time). While there are models that can clean for longer without being charged, such as the excellent 60-minute Bosch BCH625KTGB, 35 minutes is a respectable length of time for a relatively cheap cordless.

It is, however, important to note that the 35 minute run-time only applies when on the lower power setting. The Morphy Richards 732005 has two power options, depending on whether you need full suction or a longer run-time. On full power, you should expect a run-time of around 20 minutes.

The Morphy Richards 732005 is primarily designed for everyday cleaning rather than the toughest jobs – which is true for most cordless vacuums. For this reason, the vacuum’s suction can’t match up to corded vacuums or even to more expensive and powerful cordless models.

Even so, the 18V battery provides adequate suction power for most jobs according to reviewers. It is capable of cleaning on both hard floors and carpets, although carpets usually require the higher power setting which reduces run-time.

It’s important to have realistic expectations though. This isn’t a vacuum that can match the most powerful cordless models – but it isn’t meant to. Instead, it’s designed to clean most dirt while being available for a reasonable price. It struggles with heavy carpets and pet hair though.

While we wouldn’t recommend the Morphy Richards 732005 as a primary vacuum, it has enough suction power for quick everyday jobs. The two filter design can also reduce clogging – although you’ll still need to clean the filter regularly if you want it to maintain suction (more on that in a minute).

Convenience is where the Morphy Richards 732005 2-in-1 cordless vacuum starts to excel. We’ve already mentioned it doesn’t have enough suction power for the most difficult cleaning jobs, but for small clean-ups the lack of a cord, swivel head and lightweight design make it a pleasure to use.

Here are some other ease of use features included with the 732005:

The Morphy Richards 732005 comes with two filters: a foam filter which removes pet hair, fluff and other particles, and a pleated filter before the dust canister. This combination helps maintain suction power for longer, as the foam filter reduces clogging on the primary pleated filter.

As a side note, Morphy Richards sell replacement filters for the 732005 if they become too clogged, although both are washable.

With an RRP of £199.99, the Morphy Richards 732005 initially seems a little overpriced. While it has some useful features and a relatively powerful 18V battery, there are other models available for less money that seem to have stronger suction power.

The good news is that the 732005 is often available for considerably less than the RRP. We think if you can find it for less than £100, which is often possible, it provides excellent value for money. We also think it’s one of the best value SuperVac models, as it provides a balance between price point, battery power and feature list.

Do the brushes become tangled with pet or human hair?

The brushes can become tangled with hair. When this happens, it is simple to remove the brushes and unwind the hair in one go – scissors usually aren’t required.

On a side note, the filters clog relatively quickly. It’s worth cleaning them regularly if you want to avoid a loss of suction over time.

In short, if you want a cordless vacuum to replace your existing upright or cylinder, the Morphy Richards 732005 Supervac 2-in-1 probably isn’t up to the job – especially if you have pets or long-pile carpets (the GTech AirRam might be a good choice though). But if you want a vacuum that’s convenient to use on an everyday basis to keep the dust and dirt away, the 732005 could be an excellent choice. Click here to view the vacuum’s price.