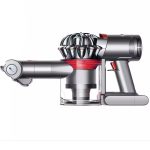 The Dyson V7 Trigger is a handheld-only version of the popular V7 series. Read our full review to find out whether it’s a match for your vacuum cleaner requirements.

The Dyson V7 Trigger is a premium handheld vacuum. It’s a pricey model, but offers the same design and cleaning power as the excellent Dyson V7 cordless vacuum. The Trigger also comes with a motorised tool, several accessories, and a 0.54 litre dust canister.

How does the V7 Trigger compare to other handheld vacuums though? And is it worth the price tag? Read our Dyson V7 Trigger review to find out. 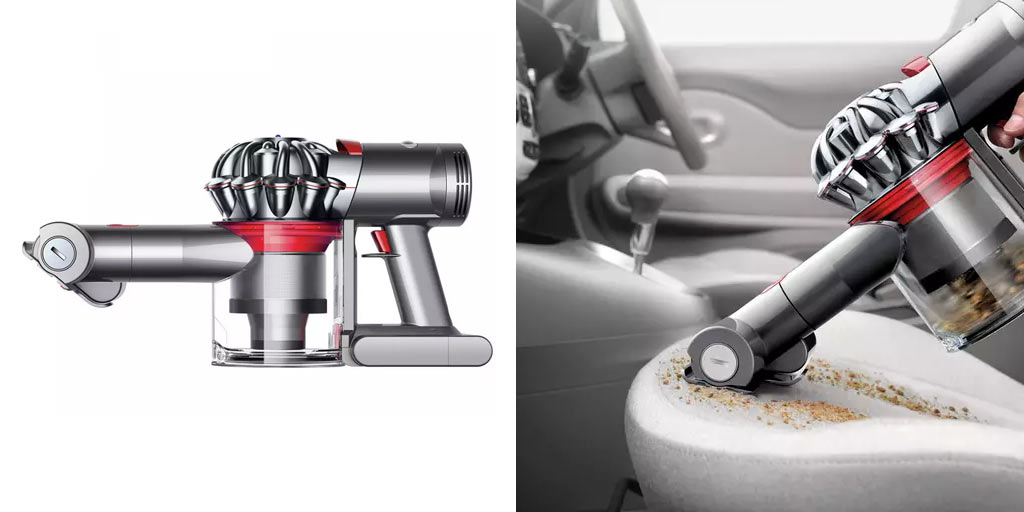 The V7 Trigger is really just the V7 Animal but without the wand and a cheaper price. This isn’t bad thing, as the V7 Animal is an excellent cordless vacuum cleaner – even though it’s less powerful than the pricier V8 series.

Like all Dyson vacuums, the V7 Trigger is a bagless model that’s built with two tiers of radial cyclones to capture microscopic dust and other particles. The cyclonic design also prevents loss of suction as the vacuum fills up, which is a common problem for cheaper handheld vacs.

Who should consider buying the V7 Trigger instead of a full-size cordless though? In short, the Trigger is a versatile handheld that’s great for quick clean-ups around the home. It’s not designed to clean an entire house, but generates plenty of suction power for smaller cleaning tasks.

Manoeuvrability and Ease of Use 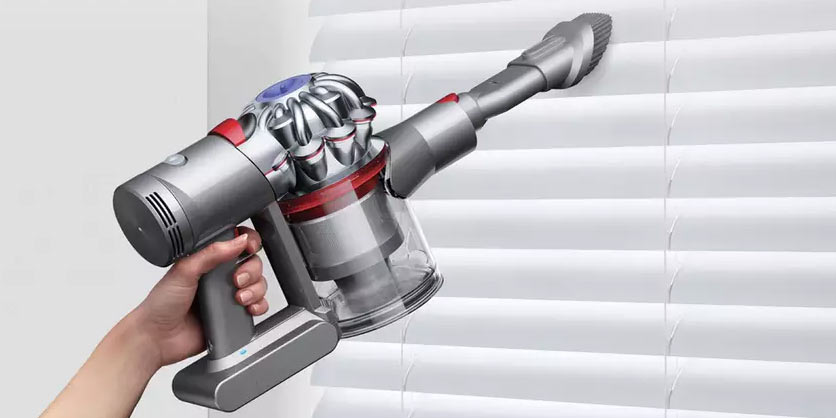 The V7 Trigger weighs just 1.38kg, so it’s considerably lighter than corded vacuums. It’s also lighter than many cordless vacuums, largely because it doesn’t have a wand or full-size floorhead. If you need a lightweight vacuum cleaner for convenient cleaning, then the Trigger is a great choice.

All Dyson cordless vacuums are built with a trigger system – and the V7 Trigger is no exception. This means you need to hold down the trigger when vacuuming, which some people find tiring. The advantage of this system is that the battery lasts longer, as the motor is only running when the vacuum is actually being used.

As the Trigger is based on the full-size V7 vacuum, it’s bulkier than most handheld vacuums. This can make it awkward to use in the tightest locations, although it’s still a great choice for car interiors and stairs.

The upside to the larger design is that it has a 0.54 litre dust capacity, which is bigger than many handhelds. For comparison, the Gtech Multi Mk2 has a 0.4 litre capacity, while the Shark WV200UK has a tiny 0.25 litre capacity. You’ll still need to empty the Trigger regularly though, as it picks up lots of dust in a short time.

The V7 Trigger includes a washable filter, which you’ll need to keep clean to maintain the vacuum’s suction power. There is no HEPA filter included with the vacuum.

While the Trigger’s filter does a decent job of removing allergens, there are better options that filter smaller particles if you suffer from allergies.

Unlike older Dyson cordless vacuums, the V7 Trigger has the company’s new hygienic emptying system. To empty the vac, you pull up the cylinder to allow dust and debris to fall into a bin. The great thing about this system is that you (usually) don’t need to touch the dirt, as it’s pushed out of the canister by a silicone collar.

Like all bagless vacuums, emptying the V7 Trigger can let allergens escape, so we recommend doing it outside if you suffer from allergies.

The V7 Trigger comes with a 21.6V battery that can provide a maximum of 30-minutes suction power. This is much longer than many handheld vacs (some models last less than 10 minutes), making the Trigger a great choice for longer cleaning sessions.

Keep in mind that the battery life is greatly reduced when you switch the vacuum to “MAX” power mode. On this setting, you’ll run out of charge in around 6 minutes, which isn’t much time at all. It also takes approximately 3.5 hours to fully recharge, which is around average for a cordless vacuum.

Note: There are two suction power modes on this model. Dyson has confusingly named the regular mode as “Powerful” and the boost mode as “MAX.” Don’t be fooled – the “Powerful” mode is just the standard suction setting. 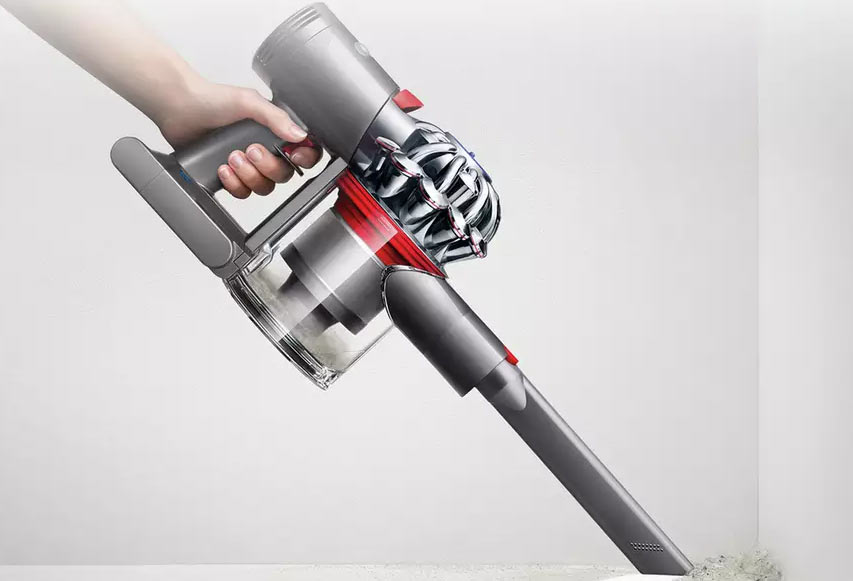 One of the things we love about the V7 Trigger is the mini motorised tool, which is a small attachment consisting of a powered brush bar and stiff bristles. Using this tool makes the vacuum much more effective at removing stubborn dirt, as the vacuum can agitate debris rather than relying on suction power alone.

The motorised tool is also great for pulling pet hair out of carpet fibres. A downside is that it requires power, which reduces the run-time of the battery – although the increased performance is nearly always worth this trade-off.

Other Tools and Accessories

The mini motorised tool is great for cleaning most surfaces, but it’s too bulky for awkward locations. It may also be too abrasive for delicate surfaces. For this reason, Dyson has included the following tools:

All of the attachments are easy to clip onto the vacuum and remove, so you won’t need to struggle with stiff release buttons. There’s no onboard storage, however, so you’ll need to store them separately.

Sadly, the V7 Trigger doesn’t include a docking station for recharging and tool storage. It only comes with a basic charger. You can purchase the docking station separately, although this obviously adds to the total cost.

The V7 Trigger provides powerful suction for a handheld vacuum cleaner. It can’t match the V8, V10, and V11 when it comes to raw power, but does a brilliant job of most cleaning tasks for a lower price. Let’s take a closer look at how the Trigger performs when faced with common handheld vacuum tasks.

The Dyson V7 Trigger does a great job at general home cleaning. In fact, it’s powerful enough in the standard suction mode that you’ll rarely need the high powered option. You might need a few passes to pickup the most stubborn dirt or hair, but this is understandable from a handheld vac.

When cleaning on hard floors, the vacuum can pick up everything from small dust particles to larger debris. It’s equally effective on carpets, as the motorised tool can dig into fibres to remove more dirt and dust, and does a great job on upholstery.

Of course, the lack of a floorhead and wand means that vacuuming large areas of carpet and hard floor is impractical with the Trigger. It excels at spot cleaning and quick tasks though.

The Dyson V7 Trigger is a brilliant tool for cleaning cars, due to the cordless design and 30-minute battery life. The mini motorised tool is also effective at removing crumbs, hair and other debris from car seats and footwells.

It sometimes struggles with tougher dirt when using the crevice tool though, which is worth keeping in mind for cleaning between seats and other awkward locations that the motorised tool can’t access. The relatively large design can also be unwieldy in small cars.

Despite these drawbacks, we still think it’s the best vacuum for cleaning car interiors quickly and easily. It won’t necessarily provide the deepest clean, but for general car cleaning it’s a great vacuum.

Like most handheld vacuums, the V7 Trigger is a convenient choice for cleaning stairs. It’s lightweight, portable, and the lack of a cord means you don’t need to worry about using a nearby plug socket.

We found that using the mini motorised tools for carpeted steps, then following up with the crevice tool for edges and corners, left our stairs looking spotless. It’s just as effective at cleaning hard floor stairs too.

When using the mini motorised tool, the V7 Trigger is one of the best handheld vacuums for removing pet hair. This is a task where the MAX mode is useful, particularly if the hair is caught in carpets or sofas, although the standard suction mode still does a decent job.

The Dyson V7 Trigger is one of the most expensive handheld vacuums on the market. We think it still provides value for money, however, as it generates much stronger suction than the vast majority of handheld vacs.  It’s also a versatile model that’s convenient to use.

It’s important to keep in mind that all Dyson cordless vacuums can be used as a handheld vacuum though – you just need to remove the stick. While the V7 Trigger is cheaper than Dyson stick vacs, you might want to consider spending a bit more to get a vacuum with both handheld and stick functions (especially if this is going to be the only vacuum in your home.)

Can You Leave the Dyson V7 Trigger On Charge?

Yes, you can leave the V7 Trigger on charge between cleaning sessions. You don’t need to disconnect it when it’s fully charged.

The Dyson V7 Trigger is an excellent handheld vacuum. The 30 minute run-time is long enough for almost any small cleaning job, plus it provides great cleaning performance.

Whether you should buy it depends on your requirements and budget though. If you’re looking for a full-size vacuum replacement, then you might be disappointed. The V7 Trigger is powerful for a handheld vacuum, but can’t match newer cordless models – and the lack of a wand makes it less versatile. It’s also not cheap!

Additionally, there are some drawbacks to the V7 Trigger’s design. The battery life in “MAX” power mode very short, so you can only use this for the quickest jobs. Its shape can also be awkward when cleaning in small cars.

On the other hand, if you’re looking for a versatile handheld that’s reasonably priced and perfect for smaller clean ups, then the V7 Trigger is an excellent choice. It generates strong suction, is a versatile vac, and outperforms pretty much every other handheld model on the market. The V7 Trigger is also brilliant for cleaning stairs, cars, upholstery, and other quick jobs.