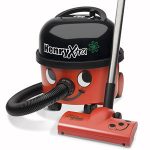 The Henry Hoover range has been a popular option for people looking for a powerful cylinder vacuum for many years. The Henry Xtra, also known as the HVX200, is Numatic’s attempt to improve on an already solid formula by adding several new features.

But how does the Xtra compare to the standard model? Does it justify the increased cost? And how does it perform in comparison to other cylinder vacuums? That’s what we’ll find out in this Henry Xtra review.

Please note: This review is written for the HVX200-A2. There is a newer version of the Xtra called the HVX200-11. The difference is minimal, so most of the points in this review still apply, but it’s important to check which model you’re buying. The biggest difference is that the 11 has a more powerful 620W motor compared to the A2’s 580W motor.

Overview of the Numatic Henry Xtra

In-Depth Look at the Xtra’s Features

With it’s classic smiley appearance, the Henry HVX200 Xtra is instantly recognisable as a member of the Numatic family. It’s not the lightest model on the market, but its impressive cleaning radius and large capacity mean it’s suitable for both professional and domestic cleaning. Let’s take a closer look at this popular vacuum’s features. 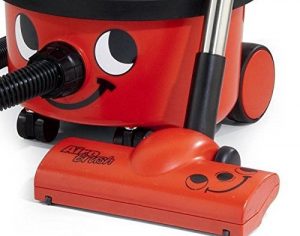 The bright red design of the Xtra needs no introduction. Many people love the style of the Henry range, as it’s a departure from the typical cylinder vacuum. But if you’re worried about the smiley face looking unprofessional (or just annoying!) you can easily remove it.

More importantly, this vacuum is bulkier than many people realise, as it’s the same shape and design as the Henry/Hetty. It’s not huge, but the size and shape make it difficult to use on stairs. It has dimensions of 36x34x37cm, so if you’re going to be storing it in a tight location make sure it fits before you buy.

Another minor drawback of all the Henry vacuums is that they can be prone to topple over. They are more stable than three-wheel cylinders (the Xtra has four wheels), but the design can feel a little top heavy.

On a positive note, Numatic are one of the most reliable manufacturers of vacuum cleaners. Their vacuums are built to last, so you’re unlikely to need to worry about the Numatic Xtra breaking down. 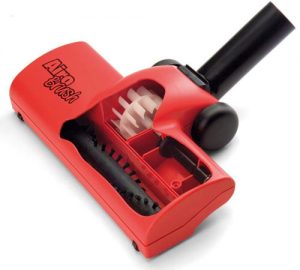 The Henry Xtra HVX200-2A is powered by a 580W motor. This sounds low, especially compared to other vacuums with a similar price, but doesn’t appear to negatively effect the suction power of the machine. It’s also one of the reasons why the vacuum has received an A-rating for energy efficiency.

While the Xtra isn’t the most powerful vacuum on the market, it has strong suction and performs well on any floor type. Whether you have laminate floors, carpets or floorboards, the Xtra has enough power to remove dust and dirt quickly and efficiently.

The biggest difference between the standard vacuum and the Henry Xtra is the addition of a new floor tool. Called the Henry Xtra AiroBrush, this is a powered brush that’s designed to remove more dust and dirt from carpets. It’s particularly efficient at picking up pet hair, so if you have a cat or dog the Xtra might be a better choice than the Henry. You also get the standard hard floor brush.

A bonus is that the vacuum is one of the quietest cylinders. With a noise level of 74.4dB, it’s considerably less noisy than many other models (particularly uprights).

Ease of Use Features 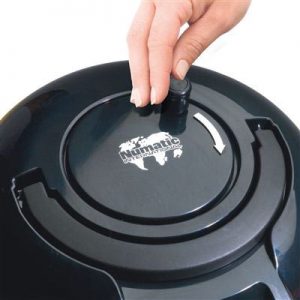 Some of the ease of use features of this vacuum include:

Tip: Need a bigger Henry for DIY tasks or other tough jobs? Check out our Henry XL Plus review.

Like other Henry vacuums, the Xtra comes with the company’s TriTex filtration system. While this does a decent job of removing dust particles, the vacuum only received a C-rating for dust re-emission. For this reason, we probably wouldn’t recommend it to anyone who suffers from a dust allegy.

In addition to the filter, the vacuum also uses HepaFlo bags. These are relatively cheap, so we recommend sticking with the official Numatic bags.

The RRP of the Numatic HVX200-A2 is £200, which makes it around £50 more expensive than the standard Henry. As the models are very similar in design and function, you’re really paying £50 extra for the AiroBrush tool, which seems pricey. It’s still an excellent vacuum, but the standard Henry is probably the better choice unless you have pets.

There’s also a tool adaptor included with the machine. This allows you to attach accessories directly to the hose (via the adaptor) rather than onto the curved tube bend. While this might seem like a minor feature, it makes it much easier to use the tools in tight spaces, especially as the Henry Xtra tools greatly increase the versatility of the machine.

Is the Henry Xtra better than the Henry?

If you’ve read this review, you should be aware of the differences between the Henry and Xtra. With these in mind, there’s no doubt that the Xtra is better than the standard model. Whether you should buy it, however, depends on whether the new floor tool justifies the extra cost.

In our opinion, the deciding factor is whether you have pets. The turbo tool isn’t that much more effective on carpets than Numatic’s standard floor head, so it’s not worth paying extra just for carpets. If you have pets, however, then the turbo brush makes a big difference to the amount of hair the Xtra picks up.

Should I Buy the Henry Xtra or Miele?

This is one of the most common questions we get about the Henry Xtra – and it’s a good one, as Miele cylinder vacuums are one of Numatic’s biggest competitors. The Miele C3 Cat & Dog, in particular, is designed to cope with pet hair and comes with a more powerful motor, A rating for hard floor performance and a turbo brush.

If we had to pick between the two, the Miele Complete C3 Cat and Dog is the superior vacuum. The Henry Xtra has a larger radius and dust capacity, but in terms of cleaning performance and dust re-emission the C3 is the better option. The Xtra is, however, considerably cheaper, so it’s still an option that provides good value.

Should I Buy the Henry Xtra or Harry?

The Harry is an interesting model, as it combines the cleaning power of the Henry with a charcoal filter and the “Hairobrush” for removing pet hair. There’s not much between the the Xtra or Harry, as they are the same price and both are better than the standard model if you have pets. If you hate smelling a pet odour in your home, especially after vacuuming, then the Harry’s charcoal filter can help neutralise this.

Yes, there are both official Numatic and third-party accessories available should you wish to replace any you’ve lost.

Overall, the Numatic Henry Xtra HVX200-A2 is an excellent cylinder vacuum cleaner. While it doesn’t match the raw power of more expensive options, we think the combination of large capacity, cleaning radius and turbo brush mean it’s a viable option for both homes and commercial cleaning. It’s also a better option than the standard Henry if you have pets. The downsides are that it’s relatively heavy and bulky, so it can be difficult to use on stairs, and there are better options for carpet cleaning (even with the added turbo brush).