The James Hoover is similar to the Numatic Henry, but designed for smaller households. It’s smaller, slightly lighter, cheaper and easier to carry – yet still aims to provide the powerful and reliable performance Numatic vacuums are famous for.

But does the James live up to the standards set by its more famous brother? And how does it compare to other cylinder vacuums with a similar price? Keep reading our James Hoover review to find out.

Note: This review is of the Numatic James HVP180-11. There are other James models with slightly different features, so make sure you know which you’re buying.

In-Depth Look at the JVP180’s Features

The James Hoover is the budget member of the Henry family. It sacrifices certain features to keep costs low, yet is still a large cylinder vacuum with a healthy dose of suction power. Let’s dig into the vacuum in more depth. 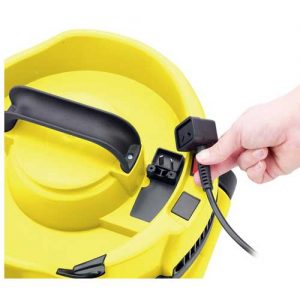 If you’ve read our reviews of the Henry Xtra or Harry, you’ll know Numatic often add or remove tools and accessories without changing the core body of their models. This isn’t the case with the James, which has a redesigned body and smaller capacity.

The first thing you’ll notice, aside from the bright yellow colour scheme, is that the cable is wound around the top of the body. Like other Numatic vacuums, this is a 10 metre cable, so you’ll be able to clean a wide area without needing to change sockets. There’s also on-board storage for the floor tool and wand.

James the Hoover comes with a tough 2.2 metre hose. This is strong a durable, but adds to the overall weight of the machine (although at 7kg it’s slightly lighter than other Henry models).

It also has a smaller capacity. Most Numatic Henry vacuums have a 9 litre dust capacity, but the James only has 8 litres. While this is noticeably smaller, it’s still one of the largest cylinder vacuums on the market, so you won’t need to empty it as often.

The James Hoover has a plugged cable (see image to the right). This makes it easy to replace should there be a fault in the cable. While a broken cable isn’t that common, this is a useful feature – especially for commercial cleaning.

One feature that’s not included with the JVP180 is the cable rewind function. This is found on every other Numatic vacuum (at least those in the Henry range), but the James requires you to wind the cable manually around the top of the body. This isn’t a major issue, but can take a bit of time with the 10 metre cable.

The JVP180-11 is the latest version of the James (at the time of writing) and comes with a 620W motor. As with all Henry vacuums, it’s not the most powerful on the market – yet provides ample suction with great energy efficiency. In fact, with an A-rating for energy usage, it’s one of the most efficient models on the market.

The James offers the same carpet and hard floor pickup as the Henry (both are rated C). Numatic Henry vacuums don’t have the cleaning performance of the best cylinder vacuums, but the James offers a good ratio of performance to price.

Despite having the same rating for dust pickup, the James is one of the few Numatic vacuums that doesn’t use the company’s standard combination floor tool. Instead, it comes with the ProFlo combination nozzle. This is similar in performance and design, including the foot switch for changing between carpet and hard floor modes, but make sure you buy the right one if you’re looking for a replacement floor head.

Like other Henry models, the James is a quiet vacuum. With a noise output of 72dB, it qualifies for our list of the quietest vacuum cleaners. If you have a baby or pets that hate the sound of a vacuum, the James is quieter than most.

Ease of Use Features

The Numatic James is designed to be simple, so it doesn’t come with many extra features. Here are a few we haven’t mentioned so far:

One of the biggest differences between the Henry and the James is the latter doesn’t come with the TriTex filtration system. Instead, it uses HepaFlo filtration. Both the Henry and James have a C rating for dust re-emission, however, so we don’t think either are the best choice for people with allergies (the Miele Blizzard cylinder vacuum is expensive but has an A-rating for re-emission).

The Numatic James Hoover is the cheapest in the Henry family, mainly due to its smaller design and lack of a cord rewind. Considering the excellent suction power, large capacity and reasonable cleaning performance, we think it provides excellent value for money. While it isn’t as effective as higher priced vacuums, it does a great job considering the low cost.

A useful extra is the double taper tool adaptor. This allows you to attach tools directly to the hose without the curved tube end, which makes cleaning in tight spaces easier.

One thing the Numatic James doesn’t come with is any type of turbo brush. This is a feature of the Harry and makes cleaning pet hair much easier, as the standard combination tool doesn’t have a powered brush bar. If you have pets that shed, the James may not be the best choice.

Numatic James Vs Henry – What are the Differences?

If you’re still not sure whether to buy the James or the Henry, here’s a quick breakdown of the main differences.

The Numatic James Hoover JVP180-11 is a difficult vacuum to review, as it’s not clear exactly who would buy it instead of the Henry or Hetty. On the one hand, it’s a relatively powerful vacuum with a large capacity, decent pickup and that provides great value for money. But it’s also only marginally smaller and cheaper than the standard Henry, yet doesn’t have the cable rewind function or TriTex filtration.

Taken in isolation, however, the James Hoover is a great vacuum considering its low price. If you need a powerful cylinder vacuum and don’t have pet hair to worry about, it’s a model we recommend. 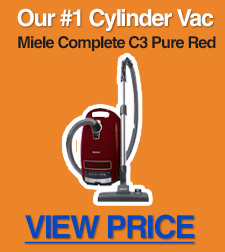