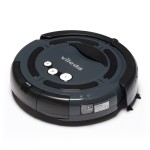 The Vileda Cleaning Robot is a budget robotic vacuum cleaner that’s a popular model amongst buyers. While it lacks advanced features, it still has a built-in navigation system, stair detector and several cleaning settings.

The real question is whether the Vileda can justify its price tag – £150 RRP – with its reduced feature set. The large number of positive reviews from buyers suggests it can, but we want to take a closer look at the machine to see what it has to offer.

So we know the Vileda Cleaning Robot aims to provide reliable performance for a budget price. But does it offer enough suction power? And how convenient is the machine considering it doesn’t have a scheduler? Let’s find out.

The Vileda Cleaning Robot has a circular design, which is common to most robotic vacuum cleaners. Surprisingly, it also has a side brush which is used to remove dust and dirt from the edge of walls (including corners).

In terms of appearance, the Vileda has a simple design with a black colour scheme. It looks a little more “plastic” than other robot vacuums at first glance, but it doesn’t necessarily look like a budget model. Here are some photos to show you what we mean:

The Vileda Cleaning Robot doesn’t have the suction power or design to handle long-pile carpets – it simple isn’t made for this purpose. The model works best on hard floors, although it can handle dust and dirt on short-pile carpets.

Reviewers seem to be happy with the suction of the machine, although it clearly isn’t as powerful as a regular vacuum (or even many handheld models). Despite this, the Vileda is capable of handling small dust particles and basic cleaning.

As you might expect from a budget model, the Vileda Cleaning Robot doesn’t come with a spot cleaning function. This means it can’t detect areas which need more focus when cleaning. It also has a relatively small dust capacity so requires regular emptying.

While Vileda claims the vacuum has an intelligent navigation system, this isn’t strictly true – as the vacuum appears to simply go in a certain direction until it bumps into something. Once the vacuum reaches a clear space, reviewers write that it then seems to move in circles until it hits something else.

This might sound inefficient, but given enough time the vacuum completes a fairly thorough clean (although there’s always the chance of missing a region).

Vileda also claims that the machine can comfortably move between rooms. This is important, as many robotic vacuums struggle when changing surface.

The Vileda Cleaning Robot is one of the simplest robotic vacuum cleaners. There’s no scheduling function – you just put it on the floor and select how long you want the cleaning session to be. There’s a short option for a quick clean-up when you’re in a rush, and longer 30 or 60 minute settings.

As you’ve probably guessed, the Vileda isn’t going to replace your upright or cylinder vacuum. However, it’s great for keeping carpets relatively dirt free until you have a chance to do a more thorough clean.

Robotic vacuums, until recently, were always expensive – unless you wanted to buy a model with terrible suction. Fortunately, that’s changed over the last two years, with a number of brands offering decent quality robot vacuums for a relatively low price.

The Vileda Cleaning Robot cleaning robot is a great example of this. It doesn’t have the features to match more expensive or advanced models, such as the AirCraft PILOT MAX, but it’s also considerably less expensive (it has an RRP of £150). So if you’re looking to try a robot vacuum but aren’t ready to commit to a more expensive model, the Vileda is a good choice.

One of the best ways to judge the true performance of a vacuum cleaner is to read reviews from buyers. We’ve summarised the positive and negative comments about the Vileda Cleaning Robot below to give you a better idea of how its been received. The vacuum has an excellent rating on shopping sites, which is impressive considering the low price. Here are some positive comments:

And here are some negative comments:

We think the Vileda Cleaning Robot is an excellent model considering the low price. Given the choice between the Vileda or a more expensive vacuum with scheduling, stronger suction and a more effective navigation system, the Vileda obviously loses out. But as it’s often 50% cheaper than other robot vacuums, this is an unfair comparison. If you’re looking for a basic, relatively cheap robot vacuum, the Vileda is definitely one to look at. Click here to view the Vileda’s price.