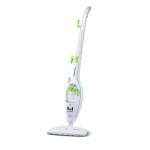 The Morphy Richards 720020 9-in-1 upright and handheld steam mop has become one of the most popular machines on the market over the last few years – and it’s easy to see why. With its range of features and accessories, detachable handheld mode and relatively low price, it seems to be a no-brainer. But is it the best steam cleaner on the market? And how does it perform? That’s what this review is all about.

It’s easy to see that the Morphy Richards 720020 is a versatile option. It has a number of accessories, and the detachable handheld cleaner makes it suitable for cleaning both floors and higher areas (much like the Vax S86-SF-CC). But how does it perform? And is it missing any vital features?

On the surface, the Morphy Richards 720020 upright and handheld steam mop is an attractive machine with a light white and green colour scheme.

As you already know, the main design feature of the Morphy Richards 720020 is the detachable handheld cleaner. This dual functionality provides options for cleaning almost any surface in your home. The handheld cleaner is also easy to detach with a single button.

The Morphy Richards 720020 has a 400ml capacity, which is relatively small compared to more expensive models such as the Kärcher SC1.020. It is, however, simple to refill – just detach the tank and pour water in. The tank is also transparent so you can always see when it needs to be refilled.

As the machine is an upright model, the floor head has been built for extra manoeuvrability. It weighs around 3kg, which makes it around average weight for an upright steam cleaner.

Like many steam cleaners, the output is controlled by a trigger on the handle. This allows you to regulate the steam output rather than having it on continuously. The downside is that your finger might get tired, but this is the lesser of two evils.

The Morphy Richards 720020 is an upright model that’s powered by a 1500W motor. While it can’t rival the power of industrial cleaners, and you should be aware of its limitations, the machine can handle most cleaning tasks around the home.

It has a runtime of around 14 minutes from a single 400ml tank of water. While this is shorter than more expensive steam cleaners, it should be long enough to thoroughly clean a room (such as the bathroom or kitchen).

In addition, you don’t need to wait for the machine to cool down before refilling it. This effectively provides unlimited cleaning time as long as you don’t mind refilling.

One of the great things about steam mops such as the Morphy Richards 720020 is the quick heating-up time. Instead of waiting close to 10 minutes to use the machine, the cleaner is ready in around 30 seconds. This, combined with not needing to wait for it to cool down before refilling, makes it a convenient steam cleaner.

The Morphy Richards 720020 9-in-1 upright and handheld steam mop, as the name suggests, comes with tools that allow you to tackle nine different tasks. Some of these tools include:

The Morphy Richards 720020 also comes with two micro-fibre floor clothes, a bag for holding all the tools and a round brush. There doesn’t appear to be much on-board storage for tools though.

The RRP of the Morphy Richards 720020 upright and handheld steam cleaner is £99.99, which is a fair price for a powerful steam mop that includes a variety of features. The good news is that there are often deals available that push the price down dramatically – often to around £50. At this price, the 720020 is an excellent option.

The Morphy Richards 720020 has received strong reviews from buyers on shopping sites, with 1000s of high ratings. It’s not all positive though, so let’s take a look at the good and bad according to reviewers.

Here’s a selection of positive comments:

And now some negative comments:

If you need a relatively inexpensive steam mop that provides the versatility of both an upright and handheld, the Morphy Richards 720020 could be an excellent option. While it’s not perfect, and isn’t going to work miracles in your home, it’s great for most cleaning tasks. Click here for the 720020’s price.