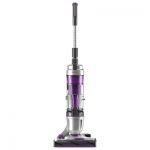 The Vax U85-AS-Pme Ait Stretch Max Pet is a popular budget upright vacuum cleaner. It’s a powerful vac with a pet turbo tool, huge cleaning radius, and a simple design – along with a tempting price tag.

How does it compare to other upright vacuums though? And is it worth buying? Read our in-depth Vax U85-AS-Pme review to find out.

Overview of the Vax U85-AS-Pme

The Vax U85-AS-Pme is part of the “Air Stretch” range. Vax vacuums in the Air Stretch series all have long power cords, but, unlike the Air Lift range, don’t have a lift-away cylinder.

This is the “Pet” version, which means it comes with a pet turbo tool. The standard Air Stretch (U85-AS-Be) has many of the same features, but doesn’t come with a pet tool.

Let’s take a closer look at the Vax U85-AS-Pme design, performance, and ease of use.

The Vax is a relatively simple vacuum cleaner. There aren’t advanced features, such as headlights or pivoting floorheads – but it’s a solid vacuum that’s designed to be straightforward and effective.

One of the standout features of the Vax Air Stretch is the huge cleaning radius. The U85-AS-Pme’s combination of 13 metre power cord and stretchable 3.6 metre hose means it can reach up to 17 metres, which is much larger than almost any other upright vac.

For comparison, we’ve reviewed uprights with a 6 metre cord and no hose – the Air Stretch really does have a huge radius. So, if you want a corded vacuum that can clean multiple rooms without changing socket, then this is certainly a model to consider. Of course, the downside is that the long cord can be inconvenient to store and is more likely to get in the way when vacuuming. There’s also no automatic cable rewind.

It’s also a lightweight upright vacuum. Upright vacs tend to be heavier than other types, but the Vax weighs just 5kg, making it more convenient to carry up and down stairs.

Despite the lightweight design, the Vax Air Stretch Pet Max provides a 1.5 litre dust capacity. This is around average for an upright vacuum, but bigger than cordless vacuums. Be prepared to empty it at least once when doing a full-house clean though.

A downside is that the U85-AS-Pme doesn’t come with Vax’s “Steerable” technology. If you’re looking for a vacuum that’s easy to manoeuvre around the home, a Vax Steerable, Dyson Ball or Shark Swivel model would be better.

There are several accessories included with the Vax U85-AS-Pme Air Stretch. These aren’t the highest quality tools we’ve reviewed, but are good enough for most tasks.

The most important accessory is the pet turbo tool, which is handy for cleaning stairs, sofas, and other areas with high traffic. This attaches to the hose, allowing you to clean areas that are difficult to access with the main floorhead.

A 3-in-1 tool is also included. This can be used as an upholstery, crevice or dusting tool, making it a versatile accessory that’s useful for tackling delicate or awkward jobs. We would have preferred these tool to be separate, however, as combining them makes the crevice tool shorter and bulkier than other vacs.

There’s also an extension hose for cleaning above furniture or on stairs, which can stretch up to a huge 5.2 metres. This hose, combined with the wide cleaning radius, means you can clean several rooms or entire staircases without changing socket.

A complaint we have about the tools is that they are fiddly to attach and detach. This is a shame, as it makes the vacuum less convenient and enjoyable to use. It’s also an easy problem for Vax to fix – there’s no reason for a modern vacuum to have tools that are difficult to use.

The Vax is a multi-cyclonic bagless vacuum, which (in theory) means it shouldn’t lose suction. It also has a motorised brush bar, which can be switched off for hard floors, along with a turbo pet tool for cleaning awkward areas.

How does it perform though?

Despite the low price tag, the Vax U85-AS-Pme generates surprisingly strong suction power. The multi-cyclonic technology maintains suction power as the canister fills with dirt, while the brush bar is powerful enough to stir up dust and debris. Considering the price, we think it provides excellent cleaning performance.

The Vax does a decent job of cleaning carpets, due to the strong suction and motorised brush bar. Don’t expect it to match upright vacuums costing twice as much, but it’s no slouch and the difference in performance isn’t as big as you would expect.

In fact, you’ll probably be surprised at how much dust and dirt the U85-AS-Pme is able to pull from carpets, even if they’ve recently been cleaned with other vacuums.

It can sometimes be difficult to push the Vax U85-AS-Pme on carpets or thick rugs, due to the strong suction. Fortunately, Vax has added a suction slider on the floorhead to open or close a vent, which wasn’t included with previous versions of the Air Reach. This isn’t a “true” suction adjustment, as the motor still runs at full power, but it’s a useful feature.

As we mentioned earlier, you can turn off the brush bar when vacuuming hard floors. This prevents scratching and stops larger debris from being scattered across the floor.

The Vax also comes with a hard floor adaptor. While you don’t need to use this, it makes the vacuum more effective when picking up dirt and dust. It’s not as convenient as being able to switch modes with a button though.

As the pet turbo tool attaches to the hose, the Vax provides excellent cleaning performance on stairs. It’s easy to clean both sides of a step, which isn’t the case for uprights without a pet tool.

An advantage of the long and stretchable hose is that it’s possible to clean stairs without needing to change plug socket halfway up. There’s also no need to balance the vacuum on a step, which can be dangerous.

Many cheaper vacuums struggle with pet hair, but the Vax U85-AS-Pme does a brilliant job when using both the standard floorhead and pet turbo tool. It picks up hair relatively easily, including both short and long hairs, and the brush bar is great for getting hair out of carpets.

If you’re looking for a budget pet vacuum, the Vax is definitely one to consider.

Surprisingly for such an inexpensive vacuum, the Vax U85-AS-Pme comes with a HEPA filter. HEPA filters are much more effective at removing allergens, such as pet dander or dust, so they aren’t pumped back into the room.

It’s worth noting that Vax recommends replacing the HEPA filter every 1-2 years, depending on how often you vacuum. This adds to the lifetime cost of the vacuum cleaner. You’ll also need to regularly clean the pre-motor filter to ensure the vacuum continues to be effective.

Emptying the Vax U85-AS-Pme is simple – in theory! You just need to hold the dust canister over a bin, then press a button to open the trap door.

There are a few drawbacks to this system though. We prefer vacuums that have an inner collar to push dirt and dust into the bin, as it’s common for clumps to get stuck and need to be pulled out by hand. As the canister is relatively thin, this becomes even more difficult with the Vax. A trap door emptying system also allows allergens to escape, which can be harmful if you suffer from allergies.

As anyone with long hair knows, it’s important to remove hair from a vacuum’s brush bar. Vax recommends cutting hair from the U85-AS-Pme, although you can remove the brush bar if it needs to be replaced.

The Vax U85-AS-Pme Air Stretch Pet Max is often sold for under £100. While it’s not the most powerful upright vacuum on the market, the low price means it provides excellent value for money.

Can You Remove the Brush Bar?

Yes, although this isn’t as straightforward as other models. As we mentioned earlier in the article, Vax recommends only detaching the brush bar when it needs to be replaced. If you need to remove hair, the company recommends cutting it loose.

The U85-AS-Pme (the model reviewed in this article) is the pet version of the Air Reach, so it comes with a pet turbo tool. The U85-AS-Be is similar in most respects, but doesn’t have a turbo tool.

As both models are similarly priced, we don’t see any reason to buy the basic version. The pet tool is useful for everyone, regardless of whether you have pets or not.

The Vax U85-AS-Pme Air Stretch Pet Max isn’t perfect, but it provides excellent value for money. It generates strong suction power, has a decent motorised brush bar, and includes a pet tool for cleaning difficult areas. Many people will also like the extra-long power cord and huge extendable hose.

There are some drawbacks though. Don’t expect advanced features, such as a lift-out cylinder or steerable design. The tools are also fiddly and the Vax can be tricky to manoeuvre around the home.

Even so,  if you want a simple vacuum cleaner that’s affordable, powerful, and great with pet hair, then the Vax U85-AS-Pme is definitely an option to consider.