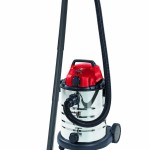 The Einhell TE-VC 1930 SA wet and dry vacuum cleaner is best described as “no nonsense.” With its durable and highly functional design, this isn’t a vacuum that’s going to let you down when you need it most.

The machine has been built to withstand heavy usage and comes equipped with a powerful 1500W motor. It’s also capable of sucking up large amounts of liquid with its 30 litre capacity, and has a system for synchronising with a power tool to be used as a dust extractor.

But how does the Einhell TE-VC 1930 SA compare to other wet and dry vacuums? What do buyers have to say about the model? And is it worth the money? Let’s find out!

We think the Einhell TE-VC 1930 SA is a surprisingly stylish model, with its bright red top and stainless steel vessel helping to make it stand out from other wet and dry vacuums.

Let’s be honest though – the Einhell TE-VC 1930 SA isn’t built for its looks. Instead, Einhell have focused on building a robust wet and dry vacuum that’s suitable for use in both a workshop or a home. In that respect, they have succeeded – and it’s even backed by a two year guarantee in the unlikely case something goes wrong.

With a 1500W motor, the Einhell TE-VC 1930 SA doesn’t lack for suction power when cleaning dry materials or liquids.

The suction power is also enough for the vacuum to be used as a dust extractor. If you’re using a power tool such as a mitre saw or drill, the vacuum can be used to remove dust or wood chips from the air (more on this a little later).

Both a standard filter and foam filter are included with the Einhell TE-VC 1930 SA. It can be used without bags, although some reviewers recommend buying bags for extra efficiency.

The Einhell TE-VC 1930 SA has one of the largest capacities we’ve seen from any vacuum, with its 30 litre stainless steel vessel. This means you’ll need to empty the vacuum much less often than other models. Even large models such as the Karcher WD3 have considerably smaller capacities.

While we haven’t managed to find official mention of the capacity for liquids and dust, a reviewer mentions that the vessel can hold the full 30 litres of dust and 22 litres of liquid (although don’t take this as fact until we can confirm it).

Importantly, there is a valve at the bottom of the vessel for emptying the vessel of liquid. This is vital, as carrying 22 litres of water isn’t easy!

One of the best features of the Einhell TE-VC 1930 SA is that it can be synchronised with a power tool. This means the vacuum turns on when the power tool starts, and switches off automatically around 5 seconds after the power tool is turned off.

While this isn’t a unique feature, it’s impressive that the Einhell TE-VC 1930 SA includes it considering the low price. If you have a workshop, the vacuum could be an excellent option for a budget dust extractor.

One of the reasons we’ve rated the Einhell TE-VC 1930 SA wet and dry vacuum cleaner so highly is because it provides excellent value for money. You can often find deals for the model costing less than £100, and for this price it’s a fantastic option for a workshop or versatile home cleaner.

The Einhell TE-VC 1930 SA wet and dry vacuum hasn’t been on the market for as long as models such as the Numatic Charles or Vax 6131T, so it doesn’t have as many reviews. However, the reviews it does  have are extremely positive, and the vacuum has received a high average rating on online shopping sites. Here’s a selection of positive comments about the Einhell TE-VC 1930 SA:

And here are some negative comments:

If you need a vacuum that’s can handle regular vacuuming, liquid spills and even function as a dust extractor, the Einhell TE-VC 1930 SA wet and dry vacuum could be the perfect option. While it’s probably too powerful to be used as a regular home cleaner, it’s great if you have a workshop or want to use the vacuum outdoors. For the vacuum’s price, click this link.