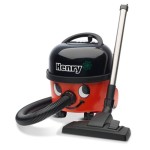 The NUMATIC HVR200-12 Henry bagged cylinder vacuum cleaner, or just “Henry” to most people, is one of the most recognisable vacuums. It’s not just about looks though. With its large capacity, two stage motor and reputation for powerful suction, the Henry has always been a firm favourite in the UK.

But how does the latest model, the NUMATIC HVR200-12, compare to previous iterations of Henry? Can the Henry still compete with cylinder vacuums from brands such as Dyson (click here for our comparison) and Bosch – especially since NUMATIC recently reduced the power of the vacuum? And, most importantly, is it worth the price? Keep reading this review to find out!

It’s easy to dismiss the Henry vacuum due to its cute appearance – but this is a mistake. The NUMATIC HVR200-12 is designed for serious cleaning, and it has the features to match. Let’s take a closer look at what’s included.

The appearance of the NUMATIC HVR200-12 Henry doesn’t need much introduction! With its distinctive red and black colour scheme, along with the perpetually happy face, it is still one of the most interesting vacuums to look at. While this is the original Numatic series, there are a wide range of other Henry vacuums.

It’s not a huge or bulky vacuum, but is considerably larger than compact models such as the Zanussi ZAN3002EL. The exact dimensions are 34x37x36cm. This larger size is mainly due to the excellent dust capacity of 9 litres (compared with just 2 litres for the Zanussi).

We mentioned the large 9 litre dust capacity in the previous section, but it’s worth taking a closer look as this is one of the best features of the vacuum.

As the Henry is a bagged cylinder vacuum, every bag replacement costs money. While bags are relatively cheap, this can add up over time – especially if the vacuum has a small capacity.

The NUMATIC HVR200-12 Henry helps alleviate this problem with a huge dust capacity. Each bag can hold 9 litres of dirt and dust, so you won’t need new bags after every clean. Aside from reduced cost, this also makes the Henry more convenient than smaller cylinder vacuums (for an overview of the different options when buying a cylinder vacuum cleaner, click here).

Tip: Need even more dust capacity for bigger cleaning jobs? You may want to take a look at the Henry XL Plus.

There was concern about the suction power of the newest Henry before release, due to the power being reduced to comply with EU regulations. However, buyers say that this doesn’t seem to have affected the suction power – Henry is as powerful as ever.

Not only that, but the Henry is designed to offer strong cleaning performance on any surface. This includes laminate floors, carpets and lino. While it’s great on hard floors (especially with smaller particles), it struggles to provide a deep clean of carpets (for a model that includes a turbo brush check out the Henry Xtra). For everyday cleaning, however, it does a decent job.

Aside from the raw power of the Henry, the vacuum is also much less likely to get blocked than similar cylinder models. If you accidentally vacuum small toys, hair bobbles or other small items, you probably don’t have to worry about blockages or damage.

Note: the original version of the NUMATIC HVR200-12 Henry cylinder vacuum cleaner, called the HFV200-A2, had a lower wattage (580W instead of 620W). It also didn’t have the Hi-Lo button allowing for two speeds. Make sure you look for the NUMATIC HVR200-12 if these features are important to you.

Aside from the large capacity, which is probably the most important usability feature, here are a few other ways Henry aims to make your life easier:

In addition, the NUMATIC HVR200-12 Henry vacuum cleaner is A rated for energy efficiency – saving you money while also helping the environment.

There is some confusion about the filtration system – with some listings claiming the vacuum has a HEPA filter, and others that it uses NUMATIC’s “TriTex” filtration system. Until told otherwise, we are going to assume that this version of the Henry only uses the TriTex system, which is a standard filter. It does come with HepaFlo bags though.

This doesn’t mean the filtration is poor though. The TriTex system is designed to maintain capacity while filtering greater amounts of small dust particles and allergens.

The NUMATIC HVR200-12 Henry vacuum cleaner isn’t the cheapest on the market, but sits comfortably in the lower range of quality cylinder vacuums. Considering the large capacity and strong suction power, we think the Henry is worth the money.

An accessory set is included with the Henry. This contains an upholstery brush, making it easy to clean sofas, along with a floor nozzle, dusting brush crevice tool and steel extension tube. The combination of large cleaning radius and included tools mean the Henry can handle almost any cleaning job.

Unfortunately, there is only storage for one tool built into the Henry, so these tools will need to be kept separately. This isn’t a major issue, but increases the chance of an accessory being lost.

We mentioned the NUMATIC HVR200-12 is a popular model – and reviews back this up. The model has hundreds of positive reviews and a high average rating on shopping sites. Here’s a selection of positive comments:

And some negative comments:

Compromises always need to be made with any appliance – and cylinder vacuums are no exception. While the Henry might not have the mobility of “sled” style cylinders, it makes up for this with a huge dust capacity and powerful suction.

That’s why we highly recommend the NUMATIC HVR200-12 Henry cylinder vacuum cleaner if you need a powerful, convenient vacuum that’s designed for serious cleaning – not just the occasional tidy-up job. We don’t, however, think it’s the best choice if you want a lightweight model or need a vacuum mainly for cleaning carpets. Click here for the Henry’s price.