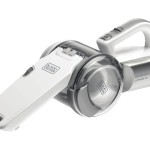 The Black+Decker Lithium 18V Compact Pivot handheld vacuum is a powerful model with a number of interesting features. These include a lithium-ion battery for extra power, pivoting nozzle and attractive titanium design.

With an RRP of £100, you’d expect the Black+Decker to perform considerably better than cheaper handheld vacuums. But is the pivot design really a useful feature or just a gimmick? And does the lithium battery provide enough extra power to justify the cost? Let’s find out.

The Black+Decker Lithium 18V Compact Pivot handheld vacuum certainly looks like a high-quality model, and has a number of features which aren’t found on other handhelds. But is it worth the money? Let’s take a closer look.

The Black+Decker Lithium 18V Compact Pivot has an attractive and modern design, with a dark titanium colour scheme and futuristic shape. It’s one of the best looking handhelds we’ve reviewed so far.

More importantly, the vacuum has a pivot feature. This allows the nozzle to pivot through 200 degrees, so it’s much more convenient to use in tight spaces (see the picture below). The pivot is especially useful for cleaning areas such as the top of book shelves, thin cracks or under furniture.

Aside from the pivot design, the vacuum folds up when charging. This helps to save space.

It also comes with an extendable nose, which is useful for getting between objects or into the folds of sofas. While this doesn’t provide the same versatility as a stretch hose, such as on the AEG AG71a, it’s a useful feature to have.

One of the great features of the Black+Decker Lithium 18V Compact Pivot is its lightweight lithium battery. This has two advantages over the batteries used in many handheld vacuums.

Firstly, the 18V battery is able to provide more power. This increases suction so the vacuum is better equipped to cope with per hair, dirt and other difficult cleaning tasks. And secondly, the lithium battery maintains a more consistent power output throughout its run-time. This prevents the vacuum gradually losing suction the longer it is used.

In addition, the battery is charged via Black+Decker’s “ECO smart” technology. This results in a battery that charges four times faster, so you can use the vacuum much more often than competing models. The vacuum also stops charging as soon as it’s fully charged, so less energy is wasted.

At this point, you might be wondering how long the vacuum lasts. According to Black+Decker, the model has a run-time of around 10 minutes (although some reviewers claim to get considerably longer than this). This is around average for a vacuum in this price range, although it may be on the short side if you want to use it for long cleaning sessions.

The good news is that, due to the ECO Smart technology, it only takes around four hours to recharge. This is much faster than many other models, which usually need to be charged overnight.

When you combine the 18V lithium battery with the vacuum’s high performance motor, the Black+Decker Lithium Compact Pivot is likely to provide much greater suction than cheaper models (such as the Vax H85-GA-B10).

This increased suction allows the vacuum to tackle more difficult tasks. It’s still not going to replicate the suction of an upright or cylinder vacuum, but it’s useful for small spills and everyday cleaning tasks.

The primary purpose of any handheld vacuum is to provide a convenient tool to quickly clean small areas, cars or stairs that aren’t easily accessible with a regular vacuum. Here are some of the ways the Black+Decker Lithium 18V Compact Pivot achieves this goal:

The Black+Decker Lithium 18V Compact Pivot handheld vacuum cleaner has an RRP or £100, which we think is a reasonable price for such a powerful, feature-packed machine.

The good news is that you can often find the vacuum available for considerably less than this. If you can buy the Black+Decker Lithium 18V Compact Pivot for around £70-80, we think you’re getting excellent value for money.

The Black+Decker Lithium 18V Compact Pivot handheld vacuum has been well-received by buyers, and has hundreds of positive reviews on shopping websites. Here’s a selection of positive comments:

And some negative comments:

We think the Black+Decker Lithium 18V Compact Pivot handheld vacuum is an excellent model that, despite the higher price tag than many other handhelds, provides excellent value for money. Its pivot design, powerful suction and quick charging lithium battery mean it’s far more advanced than many other handhelds – so it’s definitely worth considering if your budget will stretch to it.